Reviews of books for various age groups and genres.

The Devil’s Weekend by Jim Bronyaur

Jim Bronyaur’s at it again, slaughtering the world with his mind and dancing with his twisted characters of death.

Oliver Ingis loves to kill – he’s been doing it since he was a boy. His passion started with animals and led up to feeble people. But now, he stalks his healthy prey almost openly.

The urge guides Oliver with his choices, but when The Devil shows up and offers him a weekend of worry free killing… Who cares about being careful and letting the urge guide him when he knows he has the power to kill at will with no harm being done to him?

At first, he’s more curious than anything else with his new power, but eventually he gets into it, after a brief experiment. Bullets won’t touch him, and it’s reported to the police. Of course they don’t believe it and things keep spiraling more and more out of control while they hunt down The Anything Killer, they can’t do anything about.

Everything comes to a head and the police finally see that the reports are true, but when a family member of one of Oliver’s victims steps in… Hell truly does break loose.

The Devil’s Weekend was a fun and entertaining book that looks at the humanity and thoughts behind a serial killer. Sometimes monster are born, and sometimes they’re made…but, once in awhile, they’re both. I give this book 2 QUILL for the believable characters and the fun, yet psychotic, insight into the world of killing. 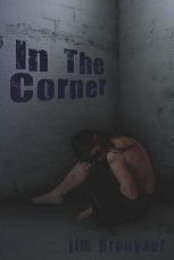 In the Corner by Jim Bronyaur

In The Corner consists of three stories. They have nothing to do with each other, and each explores the human condition in a new and horrific way.

Jim Bronyaur has the ability to get in your head and scramble things about with his intense, reality driven stories about life and choices.

When The Stars Fade:

Jimmy, a lonely computer technician, is lonely and finds a phone number for a woman who will do anything he wants for a price. When he shows up at their meeting place – a seedy bar – he receives something completely different than the sexual encounter he’d been fantasizing about.

The night from Hell is ended abruptly, but by who…or what?

This story was interesting and keeps you going and thinking with the way it switches back and forth from the present and the past. I give it a 2 QUILL rating for its graphic description and its complex, but effective, presentation.

The Second That Burns:

Trevor has some ‘issues’ to work out after almost being killed in a car accident. He was supposed to die, or so all the doctors had said. He goes to therapy regularly and makes progress in little baby steps, but when things happen that set him back, he and the doctor get discouraged.

Finding a way to push through all the things that are weighing him down, Trevor makes a huge leap in his therapy, but his fears confuse reality and he encounters his worst set back of all.

The characterization in this story was amazing. You find yourself drawn into what is going on and you actually start rooting for Trevor to get better. I give it a 2 QUILL rating for characterization and realism.

The Wrong Side Of The Tracks:

Evan and Barbra set out on an unplanned road trip, and being alone together for a long period of time brings their differences to the surface with a vengeance. But despite their personality issues, they enjoy themselves, until they meet a strange man standing in the middle of the road.

Continuing on their journey after the encounter, they face things they don’t understand and can’t explain, but the hardships help them overcome their difference; they see the things in each other that first made them fall in love.

Things progress from bad to worse, and they are each forced to make a hard choice when stuck between a rock and hard place. Will they make the right decision? Or will they take the easy way out?

This story was my favorite of the three. It was creative, intensely interesting, and sucked me in with the tension. I give it a 3 QUILL rating for the imagination and creativity that went into it.

Overall, for the entire book, I give it a 3 QUILL rating. It’s a great read and one you’ll be talking about and suggesting to friends. I hope you enjoy it as much as I did.