Reviews of books for various age groups and genres.

Crista McHugh rockets readers into her created world with style and grace.

A slave assists the investigator who is helping her mistress uncover the secrets of poison and murder. They dig deep into the past and a forbidden culture that holds not only the answers, but countless dangers for many.

Their investigation turns up way more than they planned on, but will they find the answers in time to save the life of their current emperor?

This book was interesting and the characters were relatable. I could tell where the story was going, but I still enjoyed the journey. There was plenty of conflict to build tension and a satisfying resolution. There were some grammar mistakes, but nothing overly major that took away from the story.

Spoil of War by Phoenix Sullivan

Elsbeth loses everything she has ever held dear when her home falls to the enemy in a war. She finds herself at the mercy of men she despises. Her freedom is lost.

While in captivity, she sees the powerlessness of herself and her people in graphic and disgustingly brutal detail.

Over time, she accepts her fate and falls in love with the king that holds her as his personal property and prisoner. But things never go as planned, and when a strange man comes to the castle while the king is away and takes an unwelcome liking to her, it leads her to do things that result in her suffering more abuse at the hands of cruel men.

Will she ever find freedom and happiness again? In a world where a woman is nothing more than property of men?

I struggled to decide if the main character was stupid or just so damn spirited she wanted to make life harder on herself. I found some of her self-made conflict over the top (but she was a redhead…). I also found that no matter where she turned she was being used sexually or flat out raped the entire book. I know that at the time period women were used with no thought as to their comfort or desire, but shouldn’t there have at least been a couple decent men around? The king was about halfway decent, but that was the closest any man in the title was to having a heart.

Despite all of that, the time period was believable, as were a majority of the characters. I did like the book, and although there were some grammar mistakes, they were few and far between.

Lynda Phelps is the Sex Queen of New Orleans, but she’s scared to let her wild, adventurous nature out to play with her boyfriend. He sees her as a precious treasure that should be adorned with sexy lace, when she would prefer leather.

Since she’s scared he’ll thinking less of her, she keeps her kinky side locked up tight. After all, the sex that they do have is really good, just…boring.

He senses that she’s holding something back and tries his best to get her to let loose and confide in him. But…if she does, will he be able to accept the truth and still keep her on a pedestal?

This story was sexually graphic and adventurous with real human emotions involved. The book was well written erotica that didn’t disappoint in story or heat. It’s a good example of trusting those we love with the deepest, most secret parts of ourselves – truly trusting them to love us for us.

I give this book: 3 QUILLS 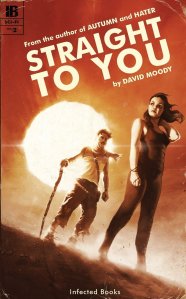 Straight to You by David Moody

Straight to You by David Moody

David Moody takes his readers on an emotion and physical ride through his nightmare of world ending destruction.

Steven and Sam experience an extremely personal emotion trauma, which neither of them really knows how to handle.

Steven shuts himself off and drowns himself in work. This affects their marriage badly.

While they’re dealing with their own life and hearts, the sun is on the verge of killing itself and the world.

Things around them keep getting worse, but they don’t pay close attention because they’re more concerned with their marriage and keeping things as normal as possible.

It’s not until Sam leaves to visit her father that Steven realizes his mistakes, but with the world falling apart faster than anyone thought possible, will he make it to her in time to straighten things out before it’s too late?

He races the deadly effects of the sun’s wrath to see the woman he loves one last time…but will he burn to death before he reaches her?

This book hit me a little too close to home for comfort – I was proud of myself for not bawling during the first few chapters. I’ve had personal experience (twice) with the traumatic, emotion struggle the couple deals with. That being said, Mr. Moody nailed it – the shutting off and distancing and the struggle with knowing how to deal with the situation at home and in public.

I thought the apocalyptic sun aspect of the story was fun, because it was different and there was no way anyone could really do anything about it. It’s the classic “the boat is going down and we’re all screwed” scenario that you don’t see too often anymore. Most people want at least that hope of salvation through some miracle. There’s none in this book. Just the hope of love and forgiveness.

I thought Steven’s journey was a bit long, but in reality, all that stuff probably would be in someone’s path to slow them down. In the end, it just showed his determination to make it where he wanted to go despite how much got in his way. Although, toward the end…he was really, really exhausted, but then flipped completely and could do things like walk and run easily that minutes before he couldn’t.

Note: The book has British grammar. 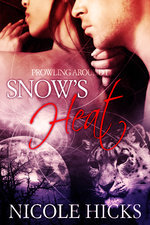 Sometimes animal urges and instant attraction makes people click. Nicole Hicks has given us a beautiful written and amusing story showing us how that can happen when you unleash and accept the animal within.

Bree is working on getting over the emotional drawbacks she’s been experiencing since her divorce. Her cheating husband made her feel like she wasn’t enough… She plans to burn him out of her memory and start fresh.

Travis is a man who has suffered his own pain and been changed in ways most people will never be able to acknowledge or accept. Being in the military changed his world, and his life, forever.

Travis doesn’t like it when Bree shows up to be a neighbor to his isolation, but he comes to grips with it as he gives in to his animal urge to make her his.

The editing for this story was almost flawless (I think I found three mistakes total, and that’s not a lot). I loved the humor and realistic ways the characters were portrayed and presented. The only place I felt this failed (but only slightly) was when Bree accepted Travis’ “special difference” without batting an eye. I felt she should have been slightly more alarmed than she was and that the reason behind her calm was weak. Saying that, since the story was so short, the author pulled it off okay.

Being erotica, the sex wasn’t as graphic as I expected. So, if you’re looking for a paranormal erotic/romance without too much detail, this would be a great short read for you.

Undead Reflections in a Jaundiced Eye by K.B. Cutter

A group of friends goes to a bar to unwind, and there is some conflict because they’re different – not everyone can handle the teasing of people of a different sexual orientation. A scuffle ensues and a man is kicked out of the bar.

After the conflict, they ignore the muted TV that’s telling them of a world meltdown and continue to drink and have a good time. Sex is the plan for later, and be damned anything that might get in the way.

While they’re enjoying themselves and downing more alcohol, the undead uprising is brought to the bar by the return of the disgruntled customer.

Things go south fast for the undead patron, but not before he has his first meal – complete with a side dish of genitals.

The relationships of the survivors fall apart as they try to survive… In the end, carnal desire is the only think to win out until death.

This story was a sexual blast through the world of the undead. The MC is pretty cynical, but that’s what’s needed to survive in sticky situations. At first I found the POV to be a bit erratic, but you get used to it and it all makes sense in the end. I give this book 2 QUILL.

Do you like reading about demons, witches, slayers, and gods? This is the book for you! The adrenaline packed ride is riddled with danger and high flying emotions.

Jennifer Lyon enchants and teases with her in-depth and soulful characters, while keeping you on the edge of your seat with action and eroticism.

Ailish – a blind, kick boxing witch – has to come home whether she wants to or not, but she’s ready for the battle that awaits her. What she isn’t ready for is Phoenix, and what he’ll mean to her.

Hand fasted to a demon, she’s imprisoned by the bad choices she has made in the past. Will she learn to let go and trust Phoenix and unleash the strength to control her powers? Can she let him become part of her soul, just to risk losing him if she fails?

Night Magic is an amazingly crafted story that I couldn’t stop reading. The characters are amazing and the story line keeps you gripped, making you wonder what will happen next. There were a couple times that I figured things out early, but I still wasn’t disappointed! I give Night Magic 3 QUILL for being an adrenaline packed, steamy ride!